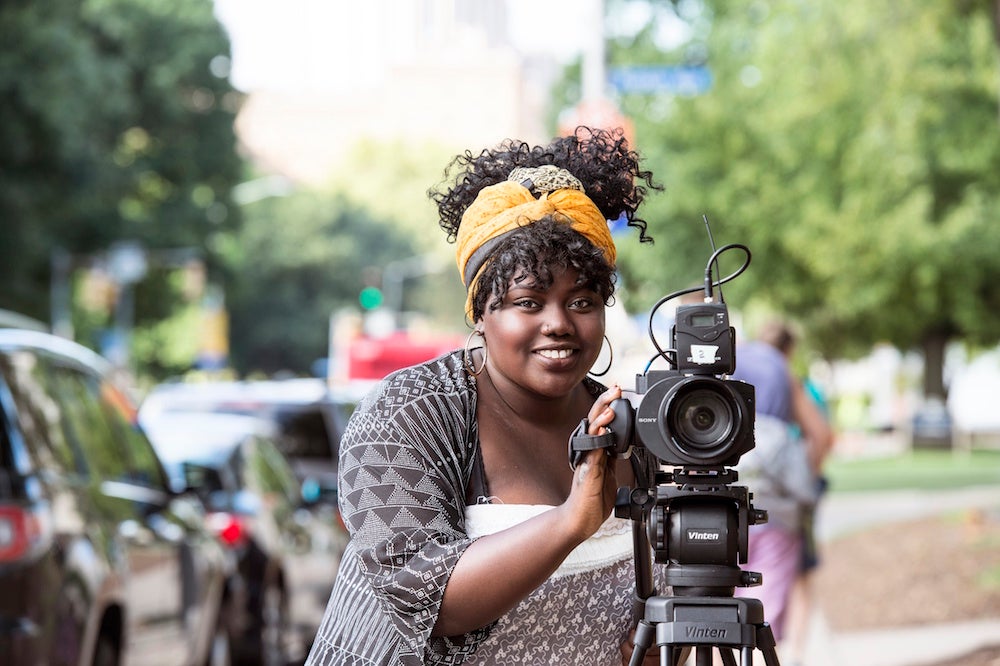 Khadija-Awa Diop, a senior studying film studies and African studies, lives by a motto she learned from Paulo Coelho’s The Alchemist: “And, when you want something, all the universe conspires in helping you to achieve it.” What Diop wants is to make documentaries about people and cultures around the world. And she’s already well on her way. Throughout her time at the University of Pittsburgh, Diop has been working on a documentary about a Sudanese refugee and “lost boy” named Daniel who lives in Pittsburgh.

“I’m taking a look into the difficulties of refugee life in terms of adjusting to the society as well as the realities that many people overlook when discussing refugee life in politics and around the dinner table,” she says. “People talk about refugees all the time now with the new election cycle and political climate. From both the left and the right side, we hear many different stances. In all of this, we forget that refugees are people, too. They’re people who have survived some sort of traumatic event and fled their countries in order to save their lives. And even when they get here, they’re fighting for their lives—finding jobs, making ends meet, raising children, experiencing culture shock, etc. The volatility of refugee life doesn’t end when they are relocated to another, ‘safer’ country.”

Alison Patterson, a lecturer in film studies and English composition in the English department, invited Diop to take on the project.

“[Patterson] had a connection to Daniel and knew that because of my background—my parents are Senegalese immigrants to the United States—and my interests in Africa, cultural studies, and social issues, I would be a person with the knowledge and sensitivity necessary to tell this story,” Diop says.

Today, Patterson continues to serve as the faculty advisor for the project, while Diop manages all aspects of production. As filmmaker, director, and editor, she will have filmed and edited the entire project herself when it is completed. Diop received a Summer Undergraduate Research Award from the Office of Undergraduate Research, Scholarship, and Creative Activity to work on the film.

“The first thing I ever wanted to be was an archaeologist, because I had watched The Mummy; then a doctor, because my aunt had started watching Grey’s Anatomy; then a wizard, because Harry Potter is just too cool,” she says. “By the time I reached middle school, I just realized I wanted to experience as much as I could and not limit myself to just one occupation. By becoming a filmmaker, you get a taste of everything you put into your films.

“No one becomes a film studies major if they don’t love it,” she adds.

Diop’s time at Pitt has helped her to incorporate her love of filmmaking into the other things she loves: culture, global studies, and African studies. “I was able to take my love of film and connect it to those things and tailor my learning experience to my needs and wants,” she says. “From my classes and research, I’ve also learned the importance of patience and flexibility. Not everything works exactly the way you want it to the first time nor does it necessarily come out immediately.”

She continues, “The most rewarding experiences I’ve had at Pitt are experiences where I’ve been able to share what I’ve done with other people. It takes a lot of courage to follow your dreams. It’s not easy. I appreciate that I’ve had many opportunities across different platforms … to share and perhaps inspire someone else or guide them to also follow their dreams.”

What is Diop’s advice to Pitt students? “Follow your gut, take calculated risks, stay the course, and enjoy life while you’re at it,” she says. “There’s a reason why you love the things that you do, and if you work hard, the universe conspires with you to make great things happen!”