Advice from a Peer Advisor

The Greatest Connections Come From Outside Our Comfort Zone 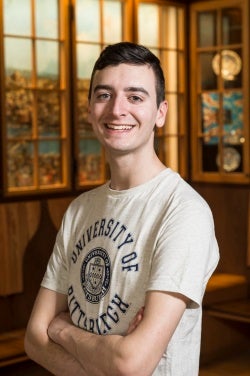 Being in a new environment and surrounded by new people can be daunting. I experienced this as a new student at Pitt, and I continue to experience it with every new opportunity I pursue. But in my time at Pitt, my greatest experiences have come from making decisions to embrace the unknown and go outside of my comfort zone.

One of the things that students hear repeatedly during orientation is the importance of getting involved on campus. Whether it be a club, sport, or ensemble, everyone encourages you to go out on a limb to try something new that may interest you.

As a first-year student, I took this to heart: During my first week on campus, I scheduled a last-minute audition for the Heinz Chapel Choir, and was invited to join in the spring term. Being the only new member walking into a choir of 50 was just as stressful as the academic transition I had experienced a term earlier, if not more so. Learning to fit myself, both vocally and socially, into the ensemble was a scary challenge. However, my fear soon faded as I found not only a group of 49 other talented performers but also friends that I would not have made otherwise.

Later, as a student majoring in history, Spanish, and Arabic languages and linguistics, I had the incredible chance to study in Seville, a beautiful historic city in southern Spain. So at the start of my junior year, I once again packed up for college, but instead of driving across the state to Pittsburgh, I was flying across the ocean racked with the same nervousness I’d had two years earlier. Living with a host family and attending a foreign university, I found myself again navigating similar challenges of integrating myself into yet another new environment.

This trend of adapting and fitting myself into different roles continued when I returned to Pitt and accepted an internship on campus in the Advising Center, and it will continue with every job I take and every place I move to in the future. As I continue to work as a peer advisor, the academic, social, and personal transitions I have experienced will help me to prepare other students for the same types of situations. I hope to not only share how to take advantage of the academic opportunities that I’ve had with incoming students but also encourage them to forge their own paths at Pitt. These unknown paths, though daunting, are endlessly rewarding.