An Inside Perspective on Coexisting in the Sciences and the Humanities 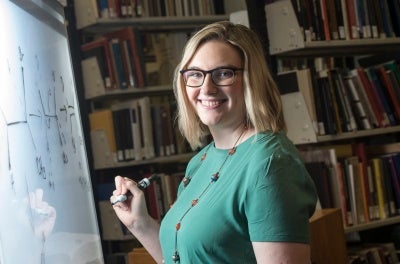 I was in the fourth grade the first time I attempted to write a book. Every spare minute of class was filled by my efforts to document the ideas and aspirations of a girl who wanted to do it all. Then at night, I would comb through my wide-ruled, handwritten pages to review what I had accomplished in my own little world that day. That was the year I knew I wanted to be a writer. But writing wasn’t the final decision for me. I don’t think it ever could be—because the fourth grade was also the year that I competed in my first science fair.

That same little girl who spent her free time scratching graphite in a notebook whenever a new idea struck her was also simultaneously finding herself increasingly stuck in between two totally different worlds. I had a passion for writing. I had a similarly strong desire to pursue scientific discovery. From the perspective of a nine-year-old, this dilemma didn’t matter all that much. I could do anything I wanted to with my life. I had nothing but potential ahead of me, and the view was amazing.

But once I reached high school, the divide (and the complications that it represented) really became apparent. And today, two years out of high school, that divide seems wider than ever.

My desire to pursue both writing and a scientific career is due in large part to the examples set by my parents. (Even though I still haven’t reached the maturity level or acquired the self-confidence or self-identity to freely and easily tell them that.) My dad is an engineer by training and a computer programmer by trade. But he’s always also been a writer on the side. My mom is the more personable one, the communicator, the businesswoman. She is also the practical one who reminds my dad and me that, even though writing may be fun, you always need to have a backup plan for those times when reality gets in the way and upsets your life goals (bummer).

Now it wasn’t just the fact that both of my parents happened to excel across a broad spectrum of fields that led me to think that I can actually major in Neuroscience and minor in English at the same time. I believe it’s because of the environment I was raised in. There was never a disregard for any field of endeavor. The sciences and literature were both highly respected. The only rule was that you had to be smart and committed to whatever career plan you thought you were going to pursue. Ultimately, it was also an environment that fostered learning and creativity.

Still, it hasn’t been easy to maintain my predilection for both the humanities and sciences. I’ve always tended to hang out with the “science types” more often than the artistic ones. After all, we mostly shared the same classes. Plus, growing up in a fiercely competitive high school as I did (It’s the largest public high school in the country, and if you’re at the top of the class, then you’re going somewhere great), the “science and math” people were significantly easier to find.

You see, the school counselors continuously emphasized that the STEM fields (Science, Technology, Engineering, and Math) were the ones that you had to pursue if you wanted to have a profession that matters (and a job when you graduated college). And they weren’t alone in this. The STEM message is everywhere, especially where women are concerned. How could I or my peers reasonably be expected to choose anything else? As a result, the science and math students were always at the front of the room. The creative arts types sat in the back. We pitied them for “not being smart enough,” while they pitied us for never being able to see the bigger picture.

My friends and peers are always a little taken aback when I tell them I’m a Writing minor alongside my premed Chemistry major. I hear someone comment on how much they hate writing at least once a week. But if our schools hadn’t encouraged us to choose a side (and defame the other) so early on, I don’t think it would be this way. There is so much overlap between the writing process and the scientific process. There is research and discovery in every field—even mathematics (I’ve known more than a few writers to be baffled by that idea the first time they hear it). It’s only natural, after all. We all want to believe that our life choice is correct. And if that is true, then the opposite decision must be incorrect.

In both the arts and sciences, the search for understanding begins with questioning, hypotheses, and research; and then progresses to assumptions, testing, results, and conclusions. And in both cases, the process is worthless unless the investigator, researcher, or essayist can effectively and coherently organize their ideas and communicate them to others. Writing at its core is about effective communication. Scientists are no less likely to be creative, and creative types are no less likely to be analytical. But writing (communication) requires something more. It requires a common framework of concepts and ideals. Thus, students of science and mathematics need to learn the humanities, and liberal arts students need to master the basics of math and science.

Growing up, we are exposed to each field separately, distinguishing them from each other from the start. But it hasn’t always been that way. Until the 1840s, scientists and scholars studied “natural philosophy,” which consisted of both the natural sciences (life and physical sciences) as well as arts and philosophy. Giants of science like Newton, Boyle, Kelvin, Priestley, and Fourier didn’t focus on just one discipline the way we do now. In a letter to the English chemist Joseph Priestley written in 1800, Thomas Jefferson listed the "sciences" that interested him as "botany, chemistry, zoology, anatomy, surgery, medicine, natural philosophy [physics?], agriculture, mathematics, astronomy, geography, politics, commerce, history, ethics, law, arts, fine arts" [1]. (Not your typical science major’s degree plan.)

I recently read an article that argued the case that we don’t need more STEM majors; we need more STEM majors with liberal arts training [2]. Well, I’d add that we also need more liberal arts majors with a little STEM training as well. This can only be done by making major structural changes to our educational system. We need to bring back music, art, theatre, and dance into K–12 core curricula, and eliminate (or at least delay) the need for students to declare their chosen specialty. And, once they are in college, we should encourage both science and liberal arts students to study outside of their respective disciplines, perhaps by allowing more pass/fail options when students choose out-of-major courses.

Pitt has made significant progress in these efforts with its Engineering Writing Program and Year of the Humanities programs and events.

I work as a peer mentor in the Writing Center and can see firsthand the impact these initiatives are making, but there’s more work to be done. We need to eliminate the artificial line that we have drawn between science and the humanities. Maybe then can we hope to produce another Leonardo da Vinci, Isaac Newton, or perhaps a Steve Jobs.

Elisabeth Ashmore is a sophomore majoring in Neuroscience with minors in Mathematics and English (Creative Writing). She is also pursuing a certificate in American Sign Language Studies. Outside of academia, she serves as a student mentor and currently tutors at the University of Pittsburgh Writing Center. When back home in Texas, she works as an activity director at Camp Summit, an outdoor camp for children and adults with all types of special needs. Upon graduation, Elisabeth plans to obtain a Masters in health management (with a focus on working with the deaf or disabled) and then a doctorate degree in educational neuroscience.